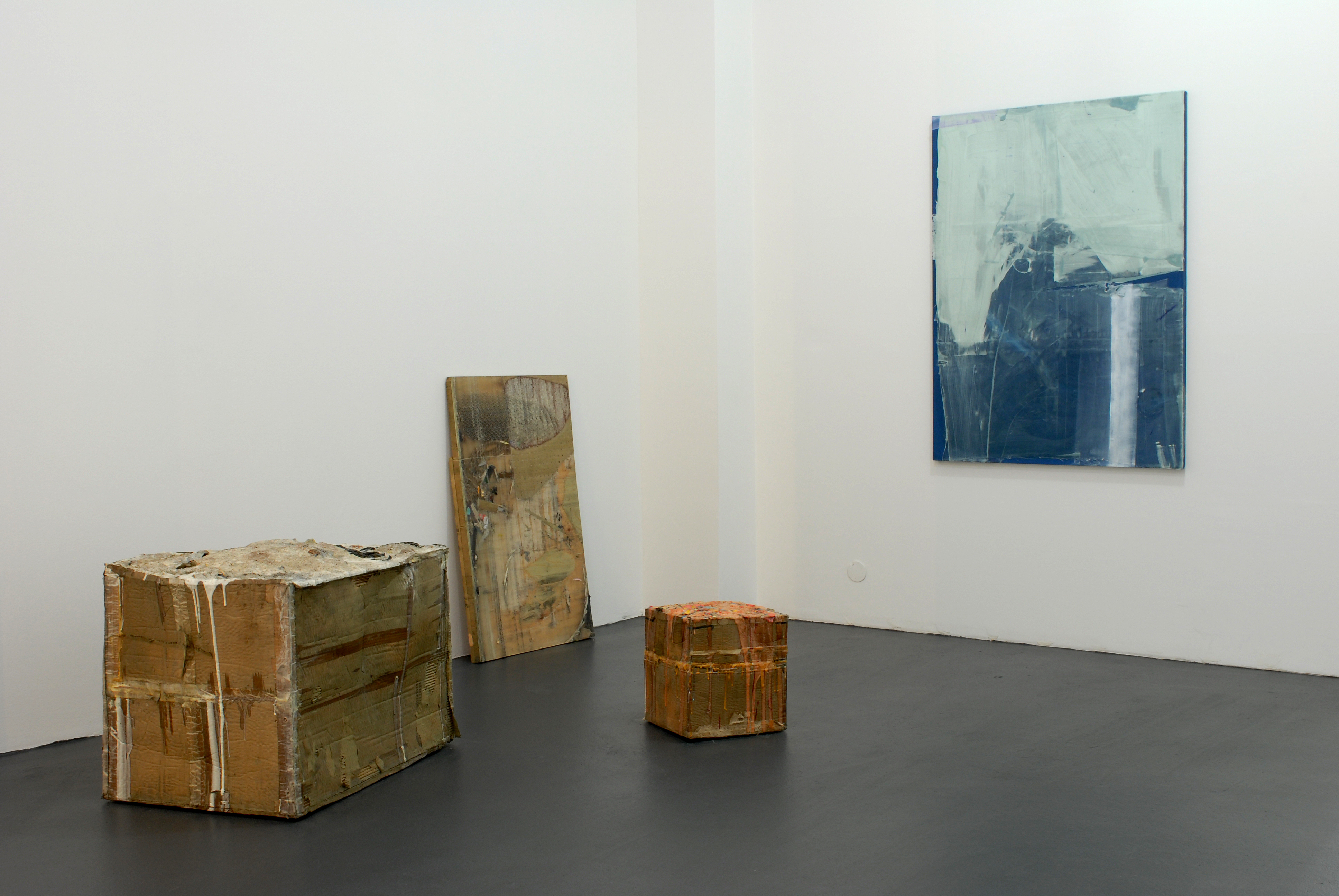 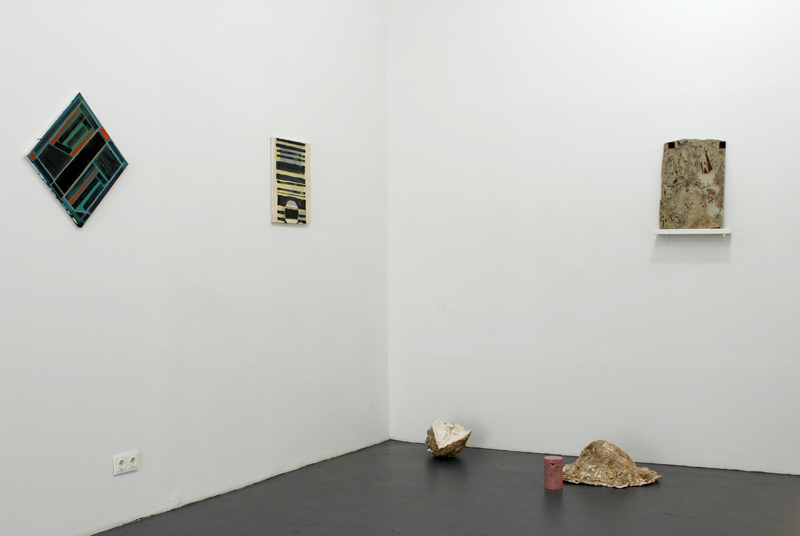 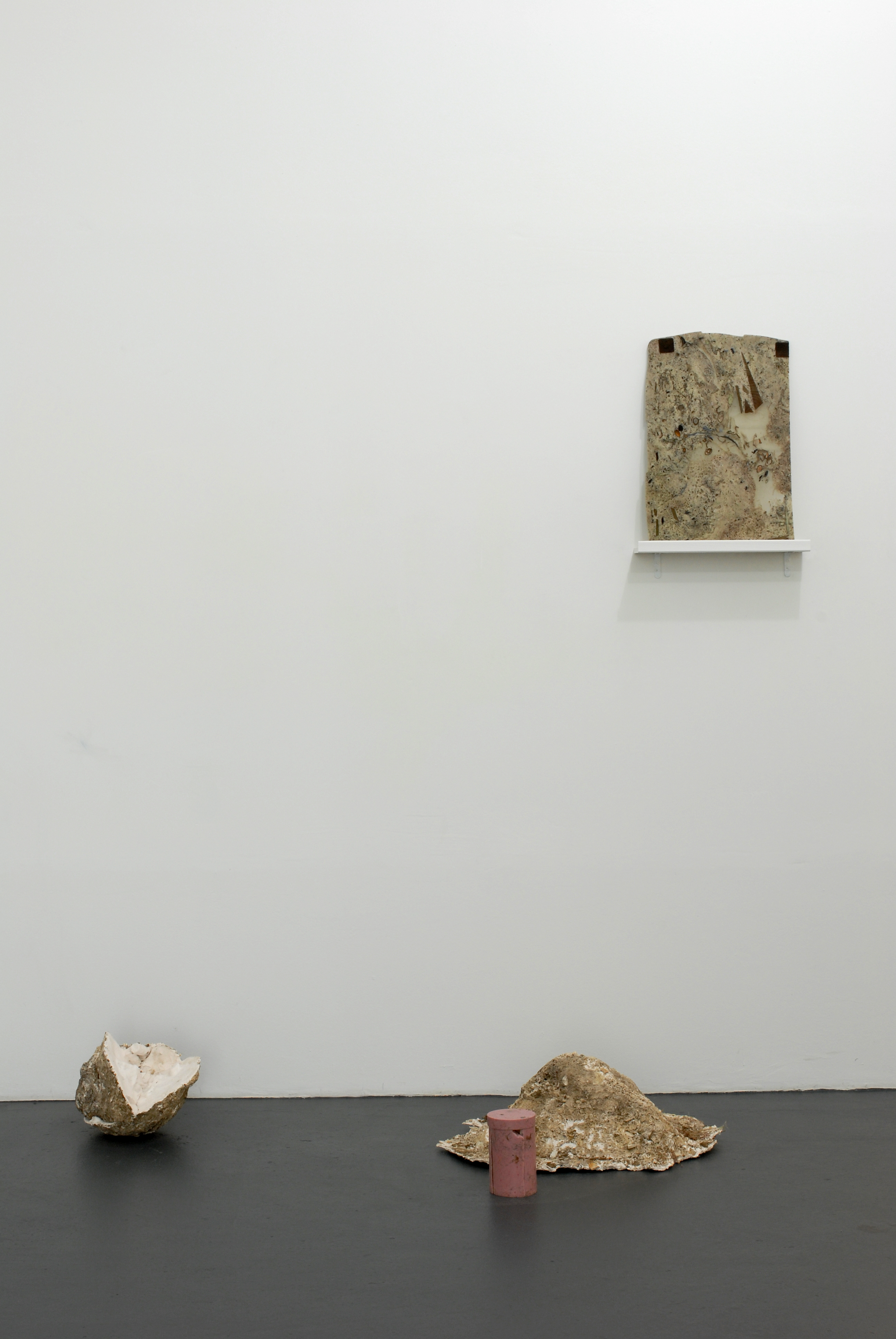 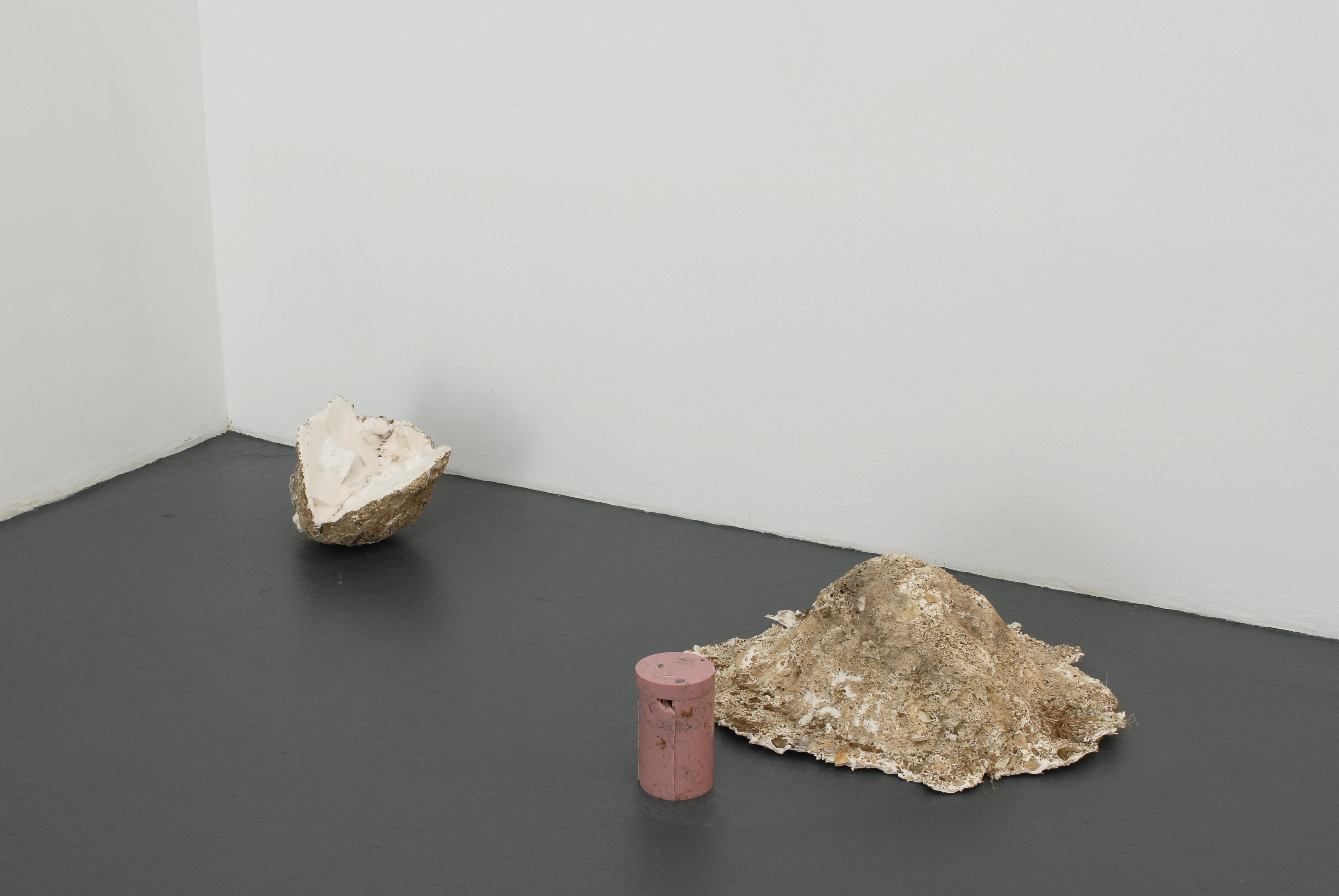 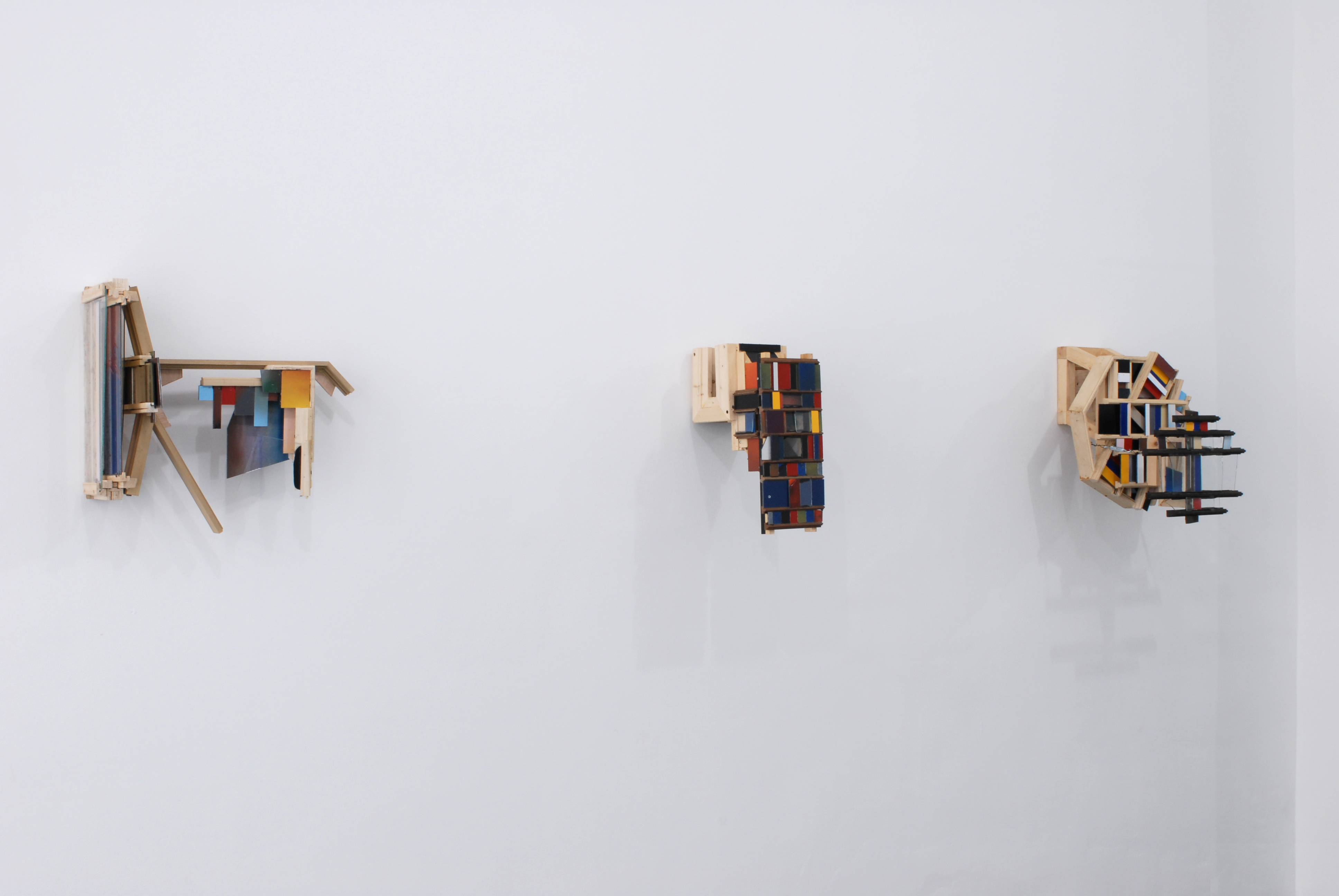 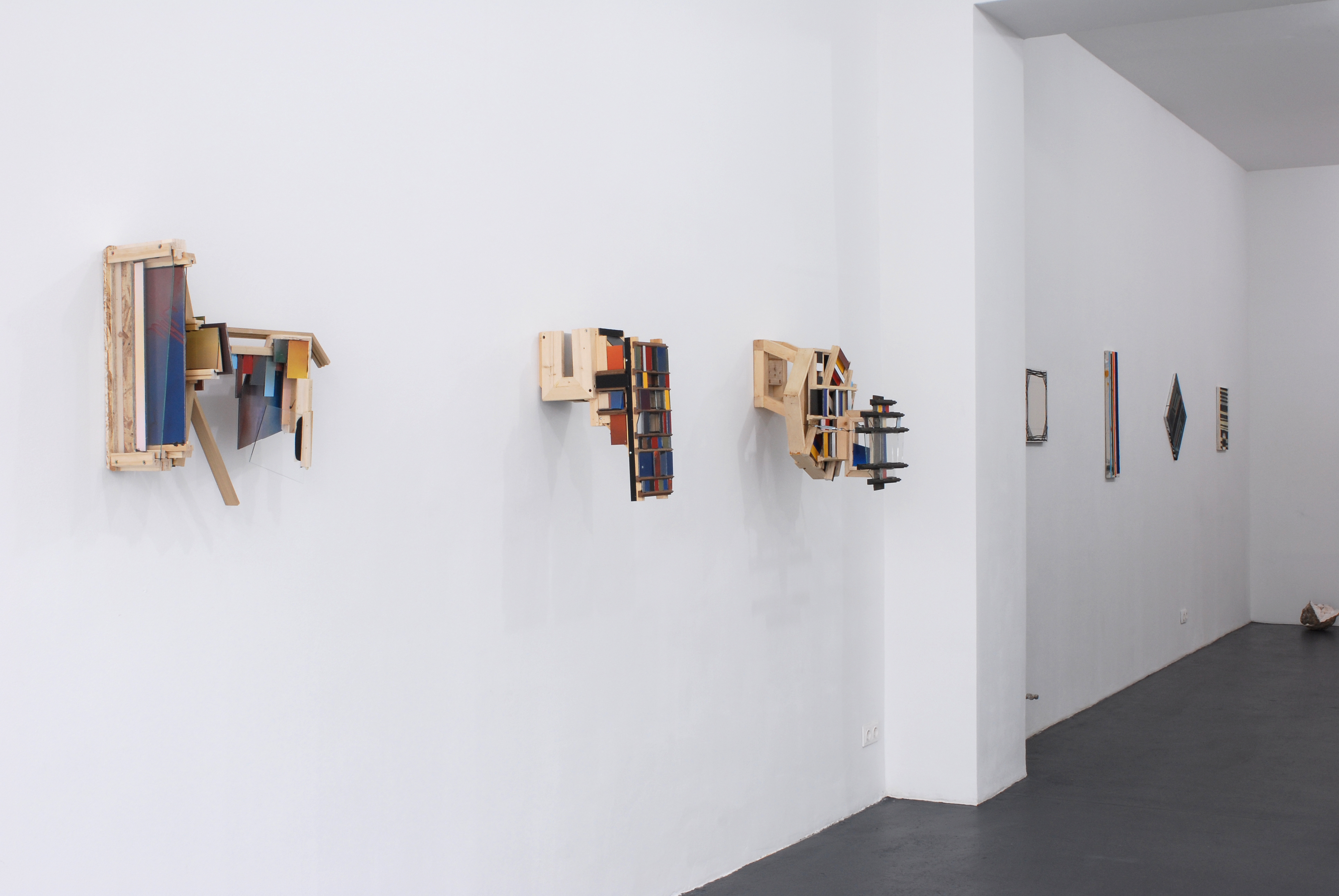 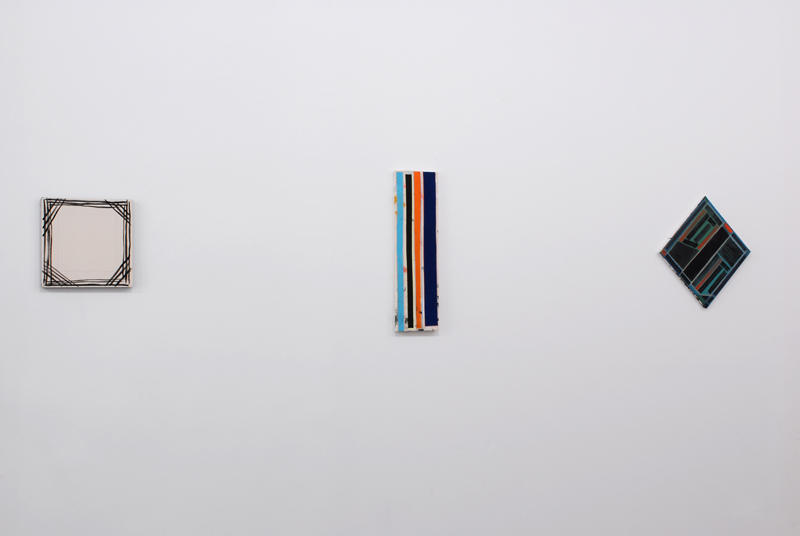 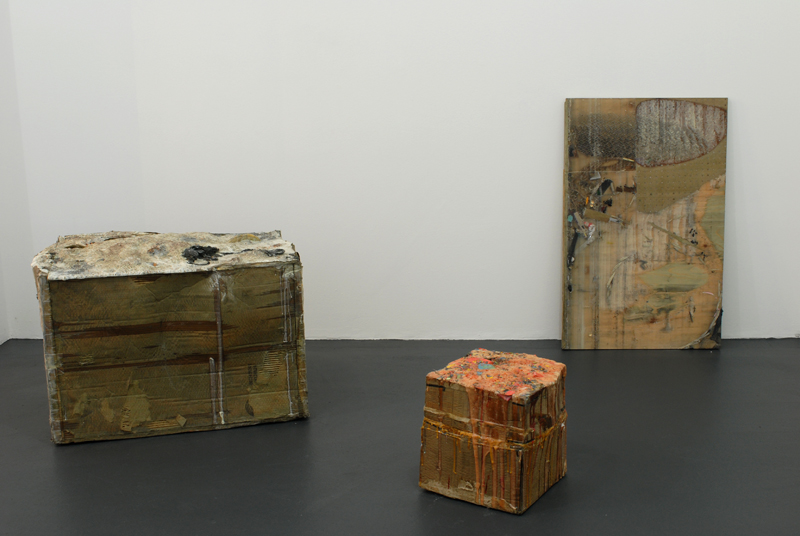 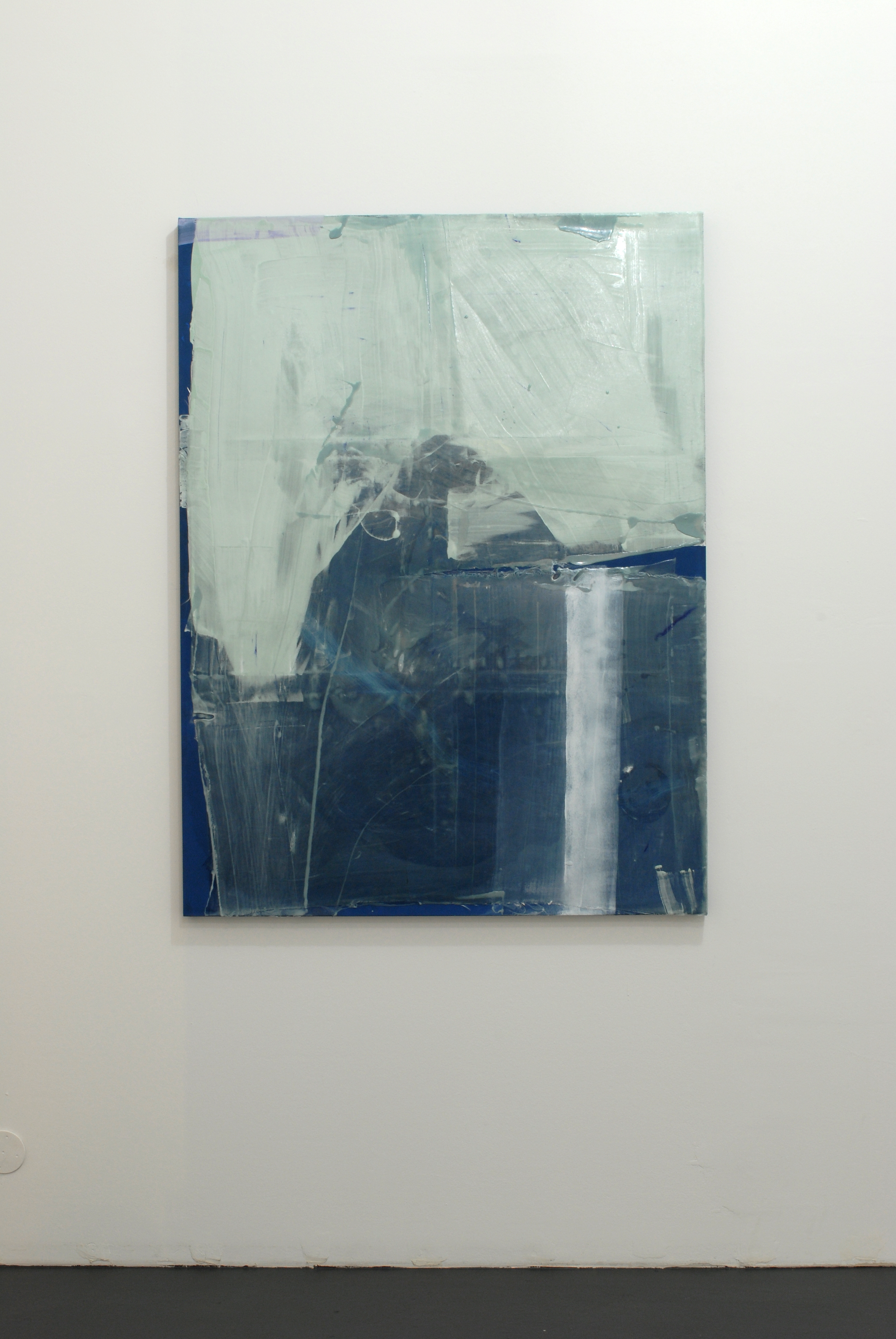 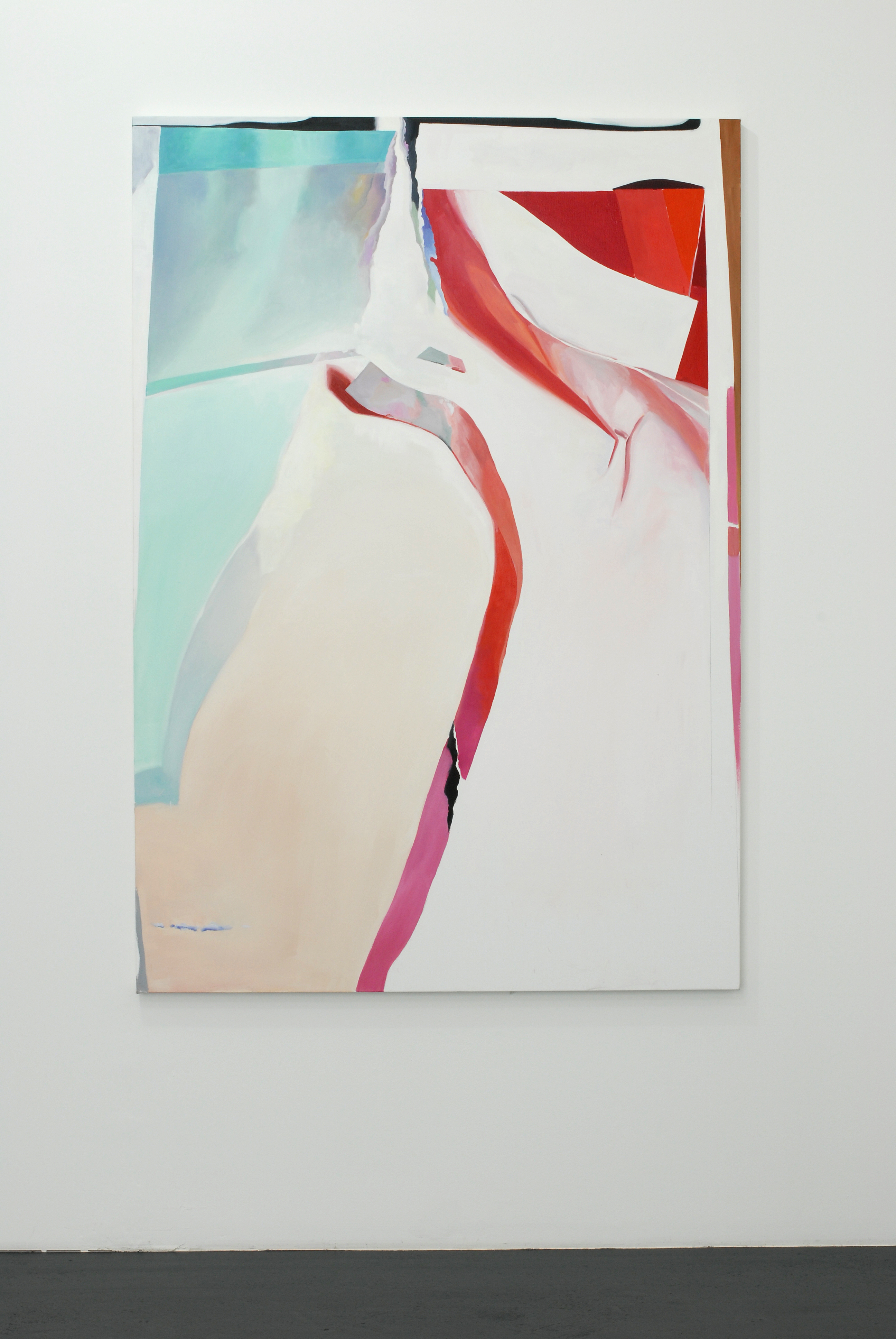 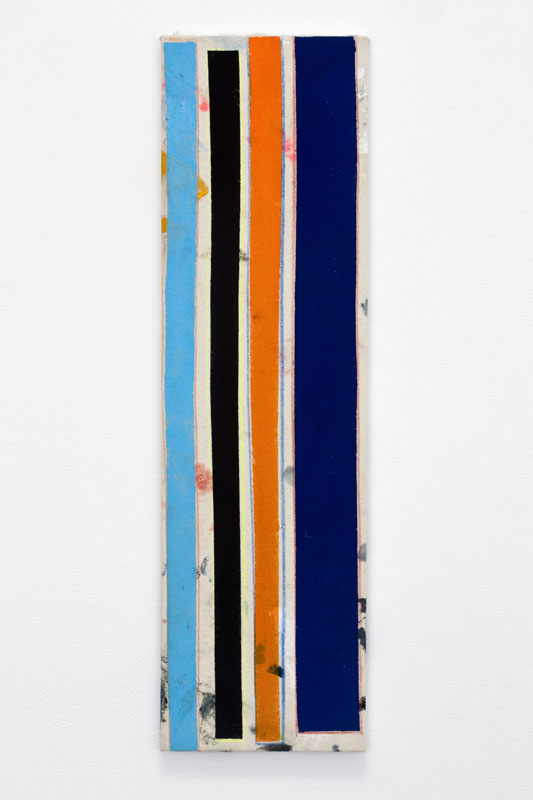 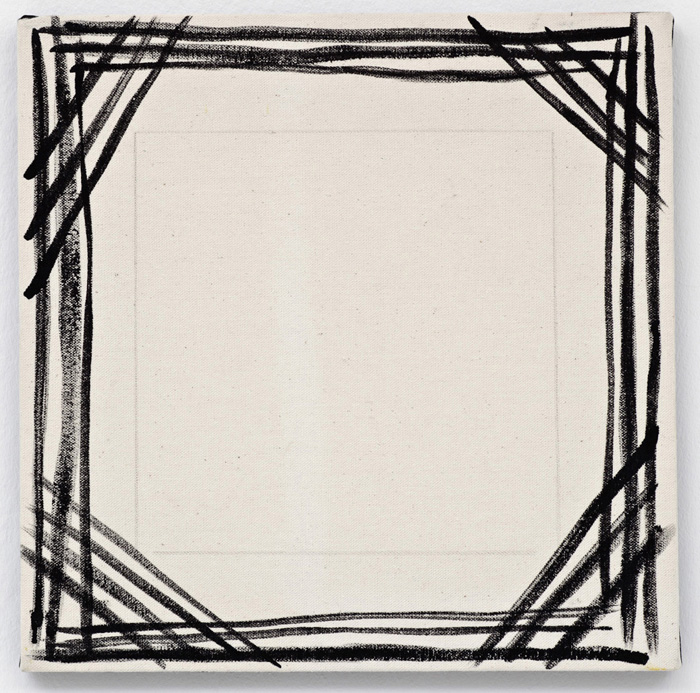 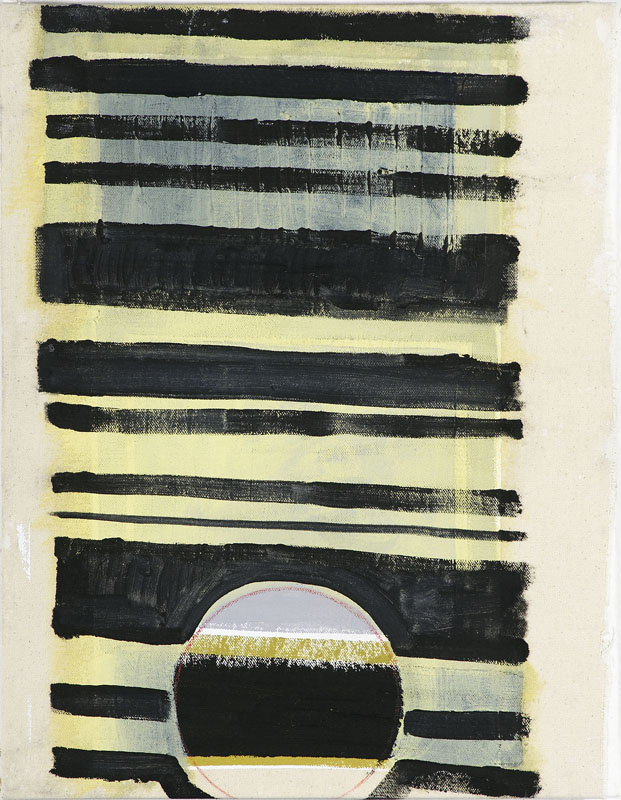 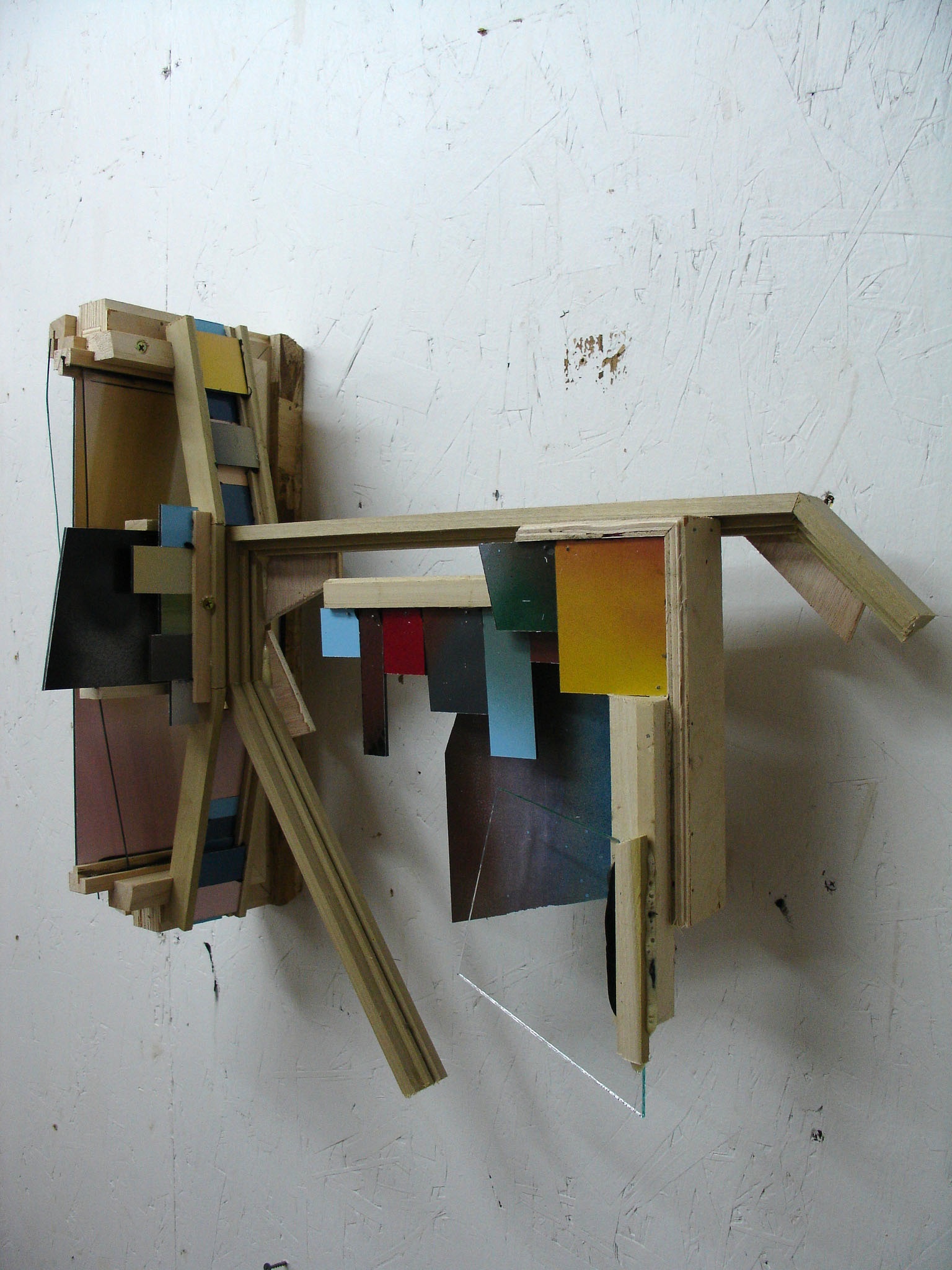 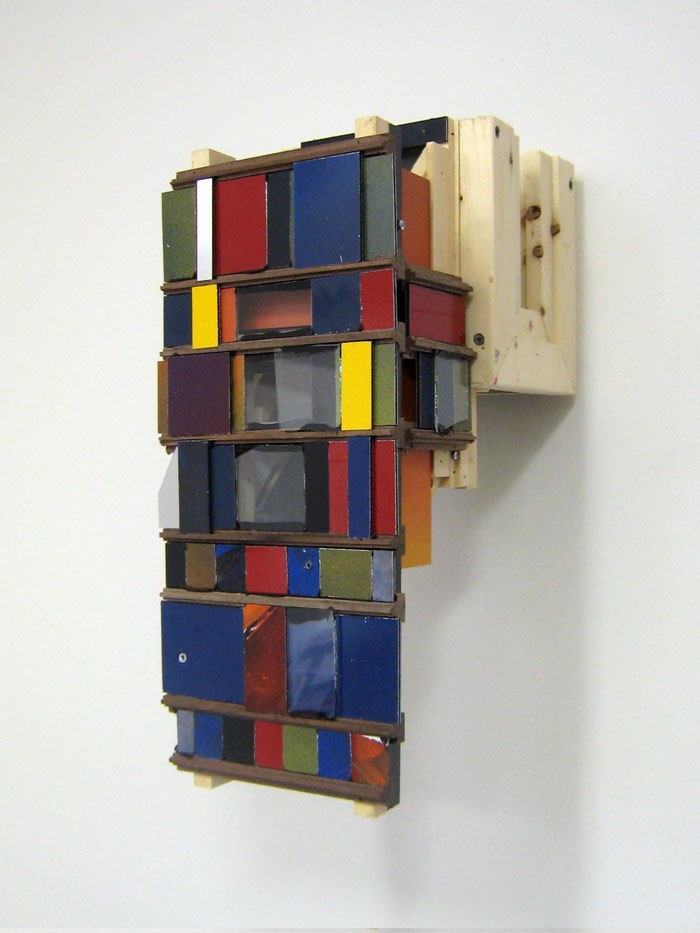 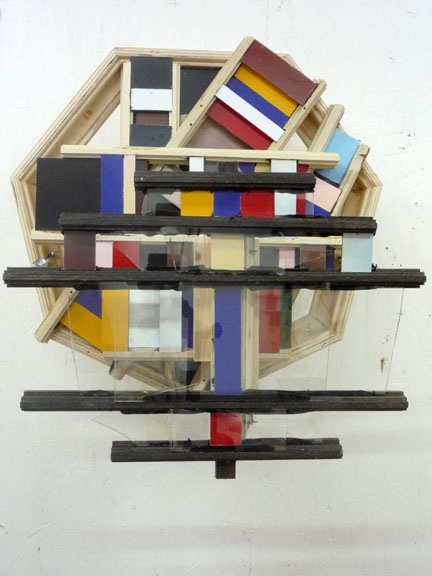 INFO
*Coming in From the Cold* is a group exhibition curated by Nicola Vassell that examines the anatomy of abstraction through new innovations in painting and sculpture. Four young artists, Jedediah Caesar, Matt Connors, David Hendren and Alex Hubbard use method and material to tackle the historical limitations of abstract art. Circumventing traditional precedents, they offer a fluid, more organic re-interpretation of „cold“, hard-edged formal conventions.

In the works of these artists, gestures of destruction prevail. This mode of operation is brought forward through conflict between materials, deviation from formal logic and the collapse of predictable process.

Jedediah Caesar inhabits the land where forgotten materials animate a new kind of order. Chaotic accumulations of debris and studio junk are embedded in resin and become artifacts of resurrection. The resulting resin blocks are cut into geometrical forms that expose an arrangement of shapes staggering beneath polished surfaces. Tension is an inner event that recalibrates deceivingly tranquil exteriors.

or the dismantling thereof. In the small paintings on view, Connors supplements or deducts elements of "the mathematical grid" by animating horizontal, vertical and diagonal axes with strips of color. Resulting echoes of line confirm a minimalist submission to the flat plane while the naivete and crudeness suggested by brushstroke do not preclude effort.

David Hendren takes a detour from the homogeneity of minimal sculpture by rethinking the properties of construction. Employing a modular approach, Hendren’s units are anything but standardized. Wall-hanging abstract sculptures of wood, glass, mirror and paint enact a frenzy of fragments that possess labyrinthine entry and exit points. The logic of each work depends on the dissonance created by all its parts. These objects resemble architectural studies of future cities where predictability and chaos splinter space to maximum effect.

Alex Hubbard’s paintings descend from his video works in which performance is the central communication. Layers of material depicted on canvas appear to absorb and bare the momentum of action. Consequently, Hubbard’s final imagery retains the effect of performance and movement. Folds, cuts, tears, and flips illustrate moments of disruptive action as if frozen at the instance of infliction.

*Coming in From the Cold* offers a fresh contemplation of systems already archived by the towering abstract tradition. Through alternative channels, these four artists divert the conversation yet again.

The exhibition opens at DUVE Berlin on October 23 and will be on view through Dec 5, 2009.
Text by Nicola Vassell, October 2009