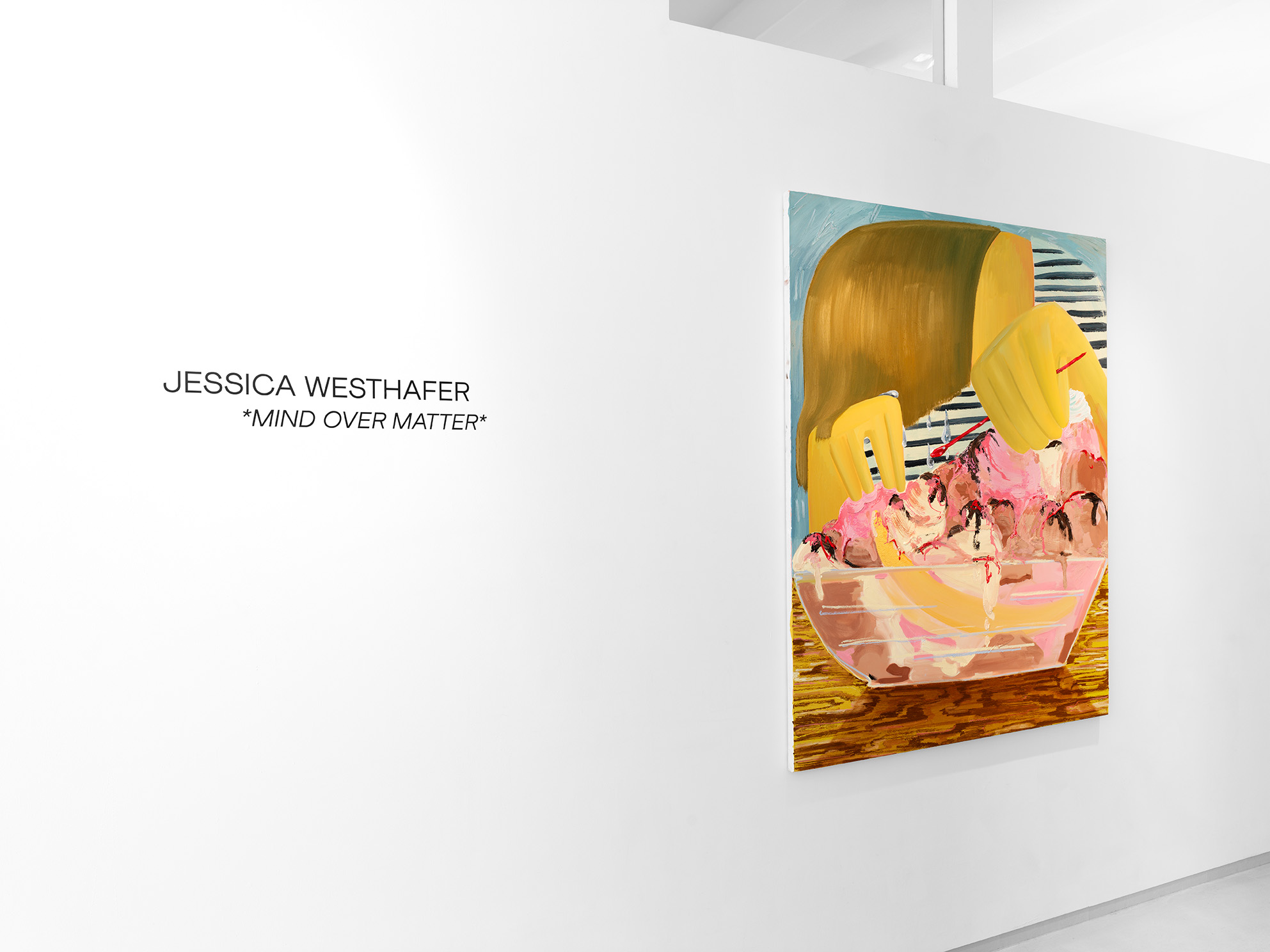 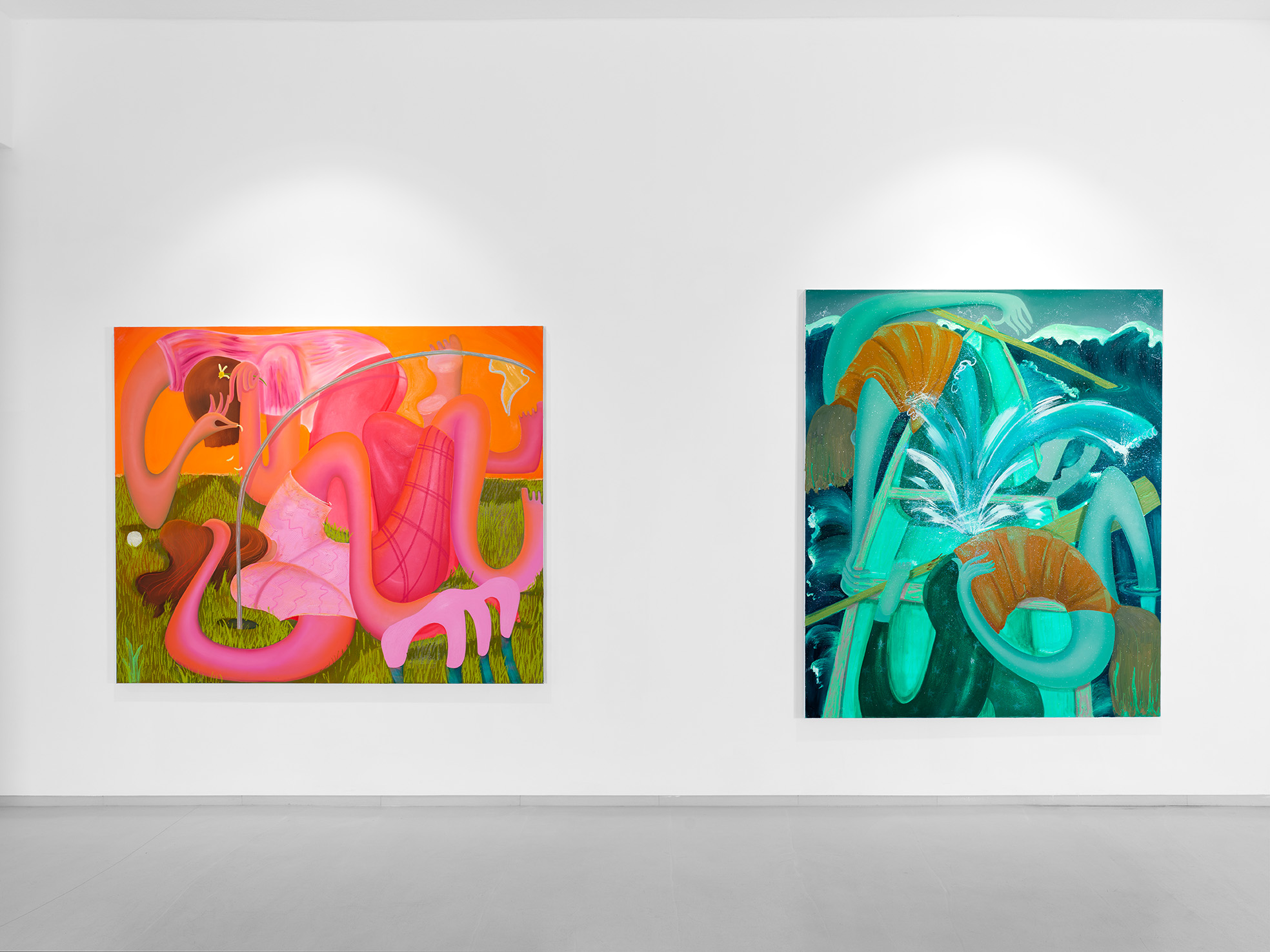 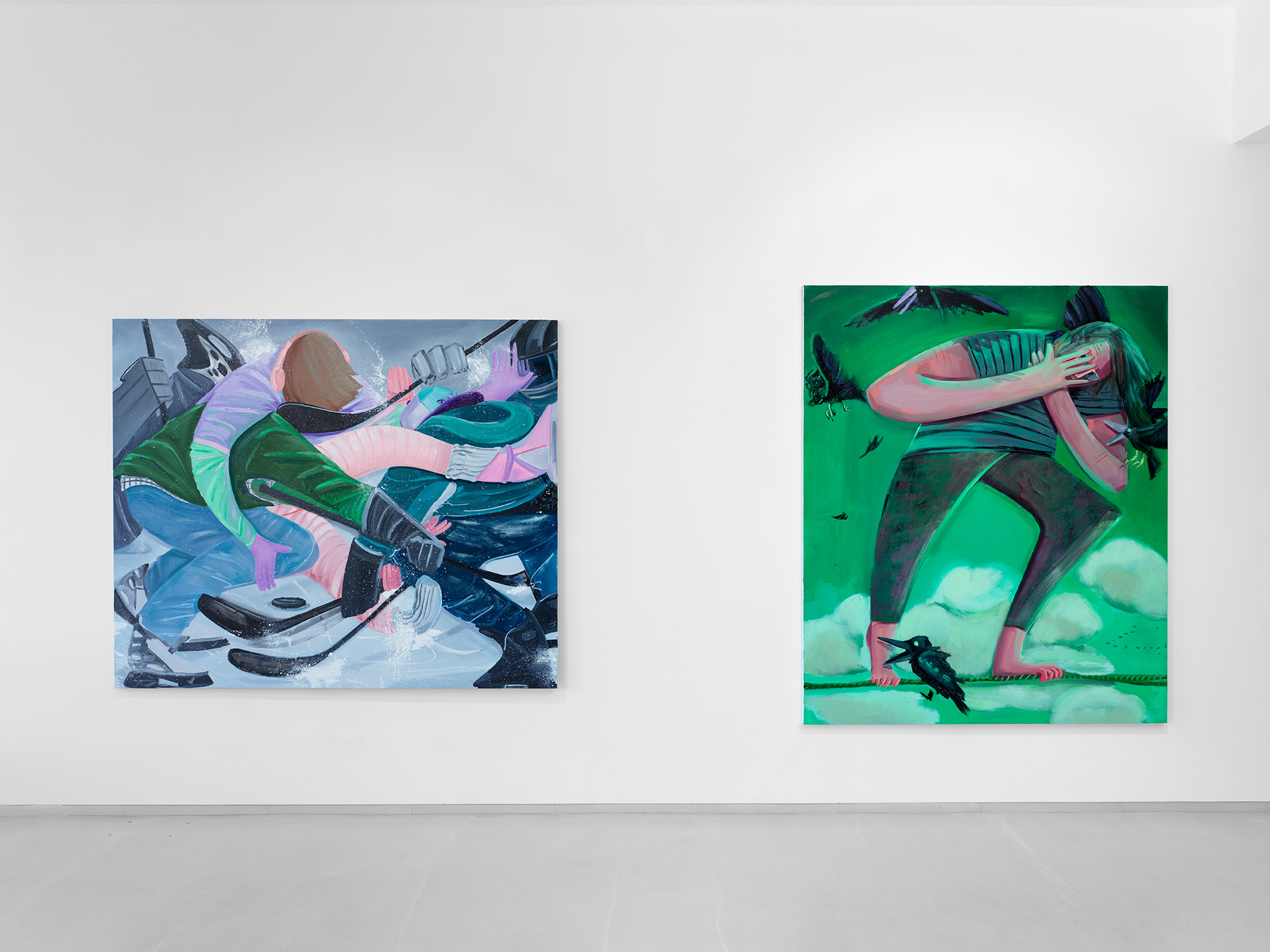 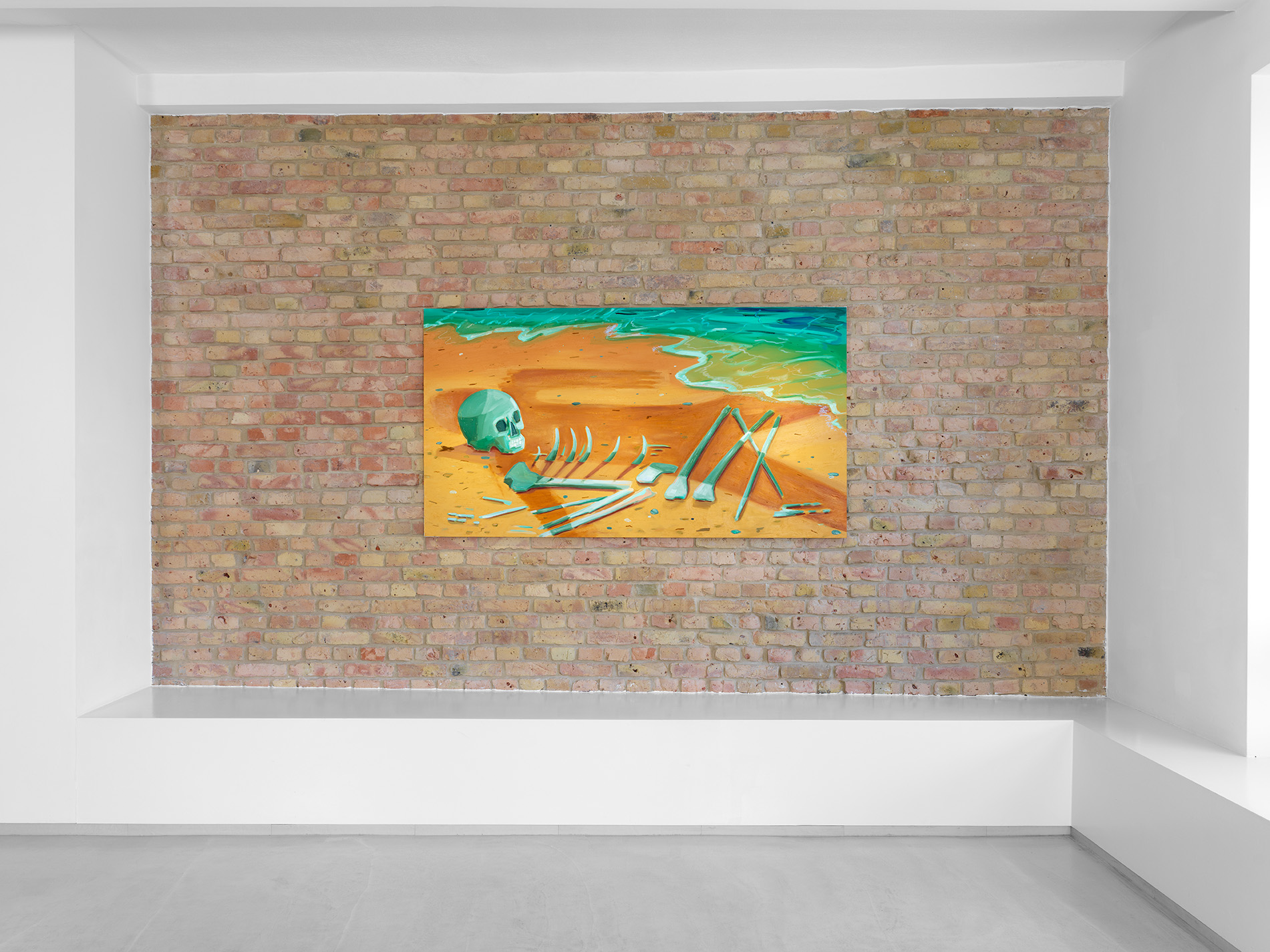 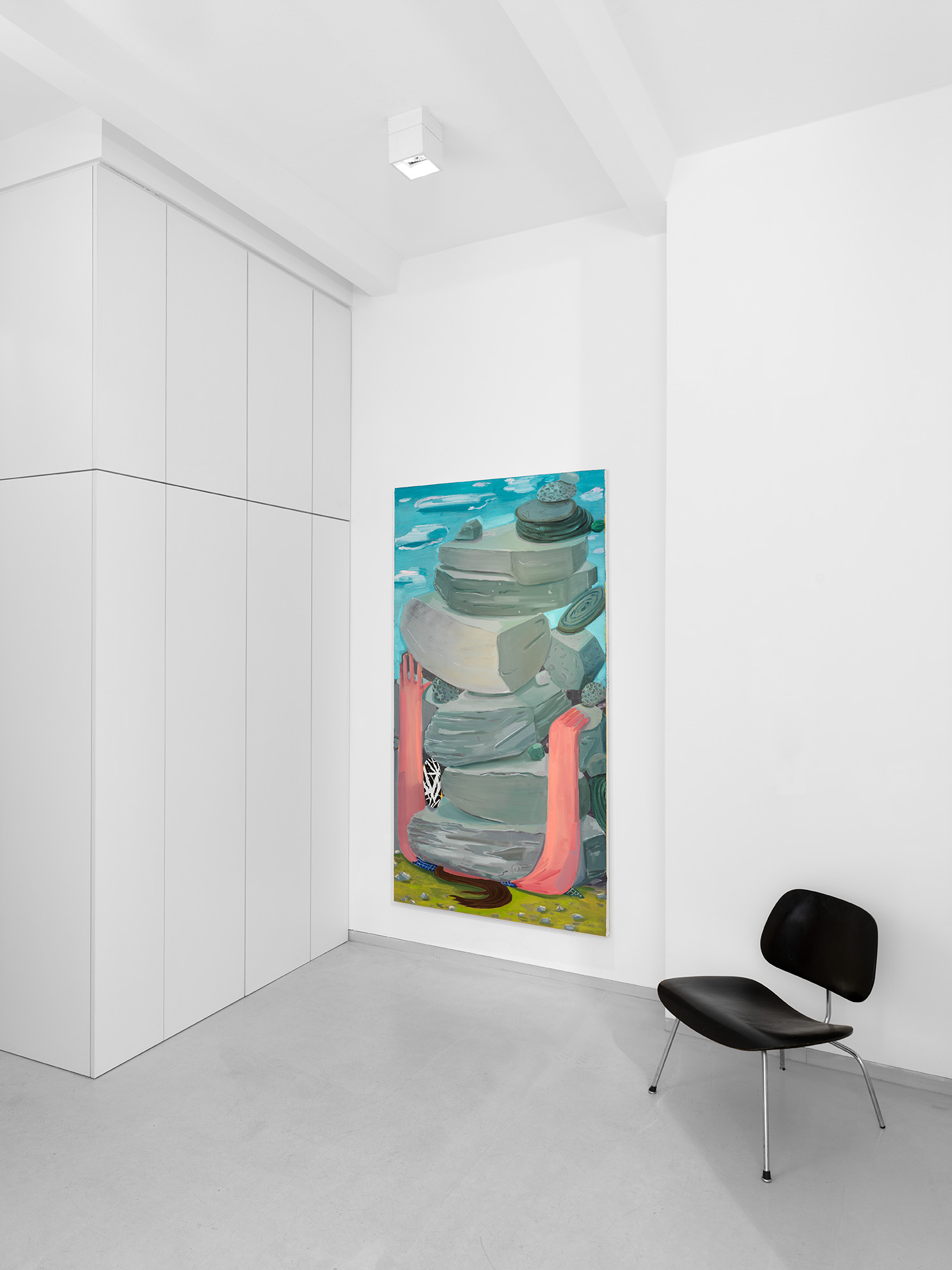 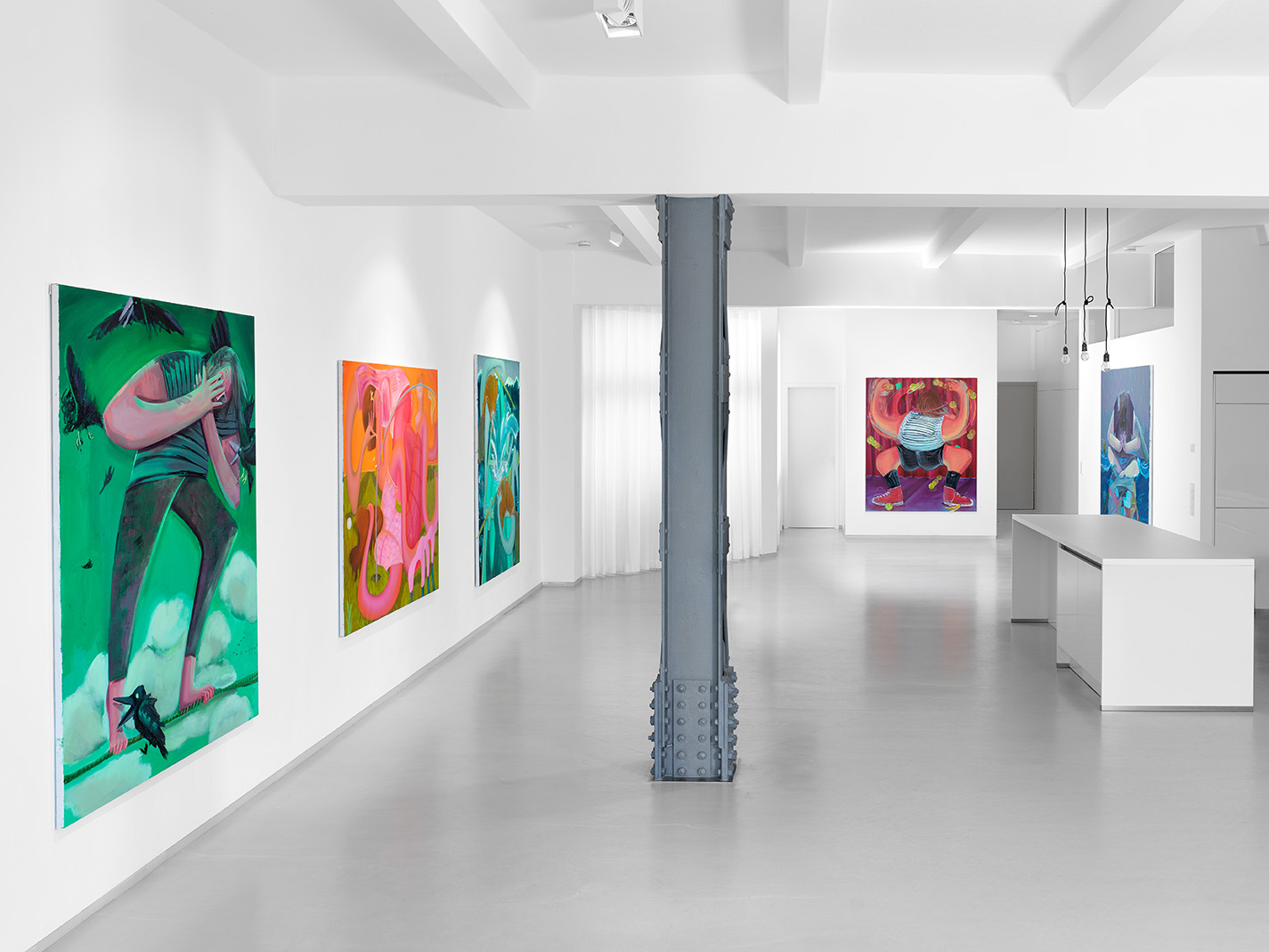 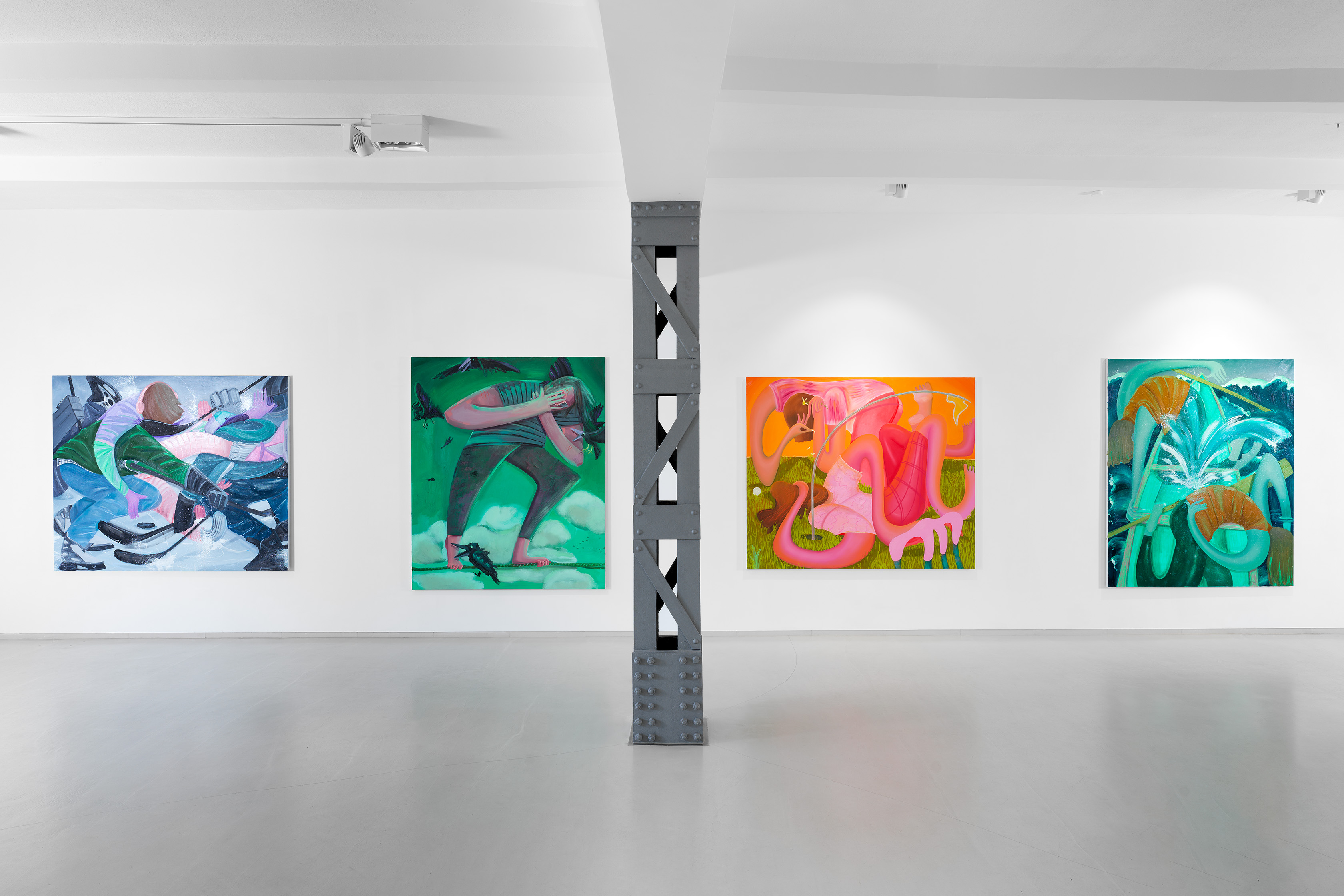 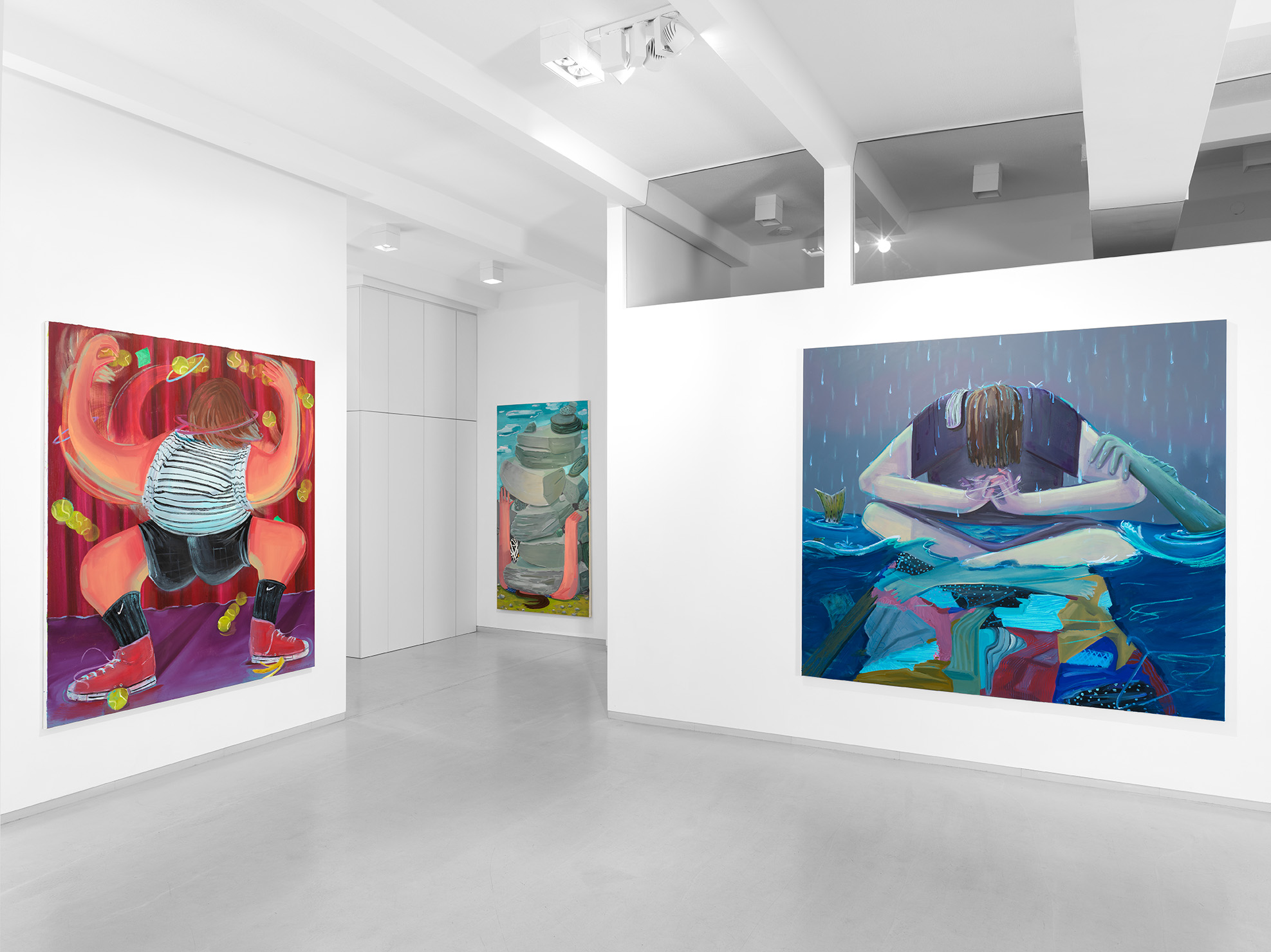 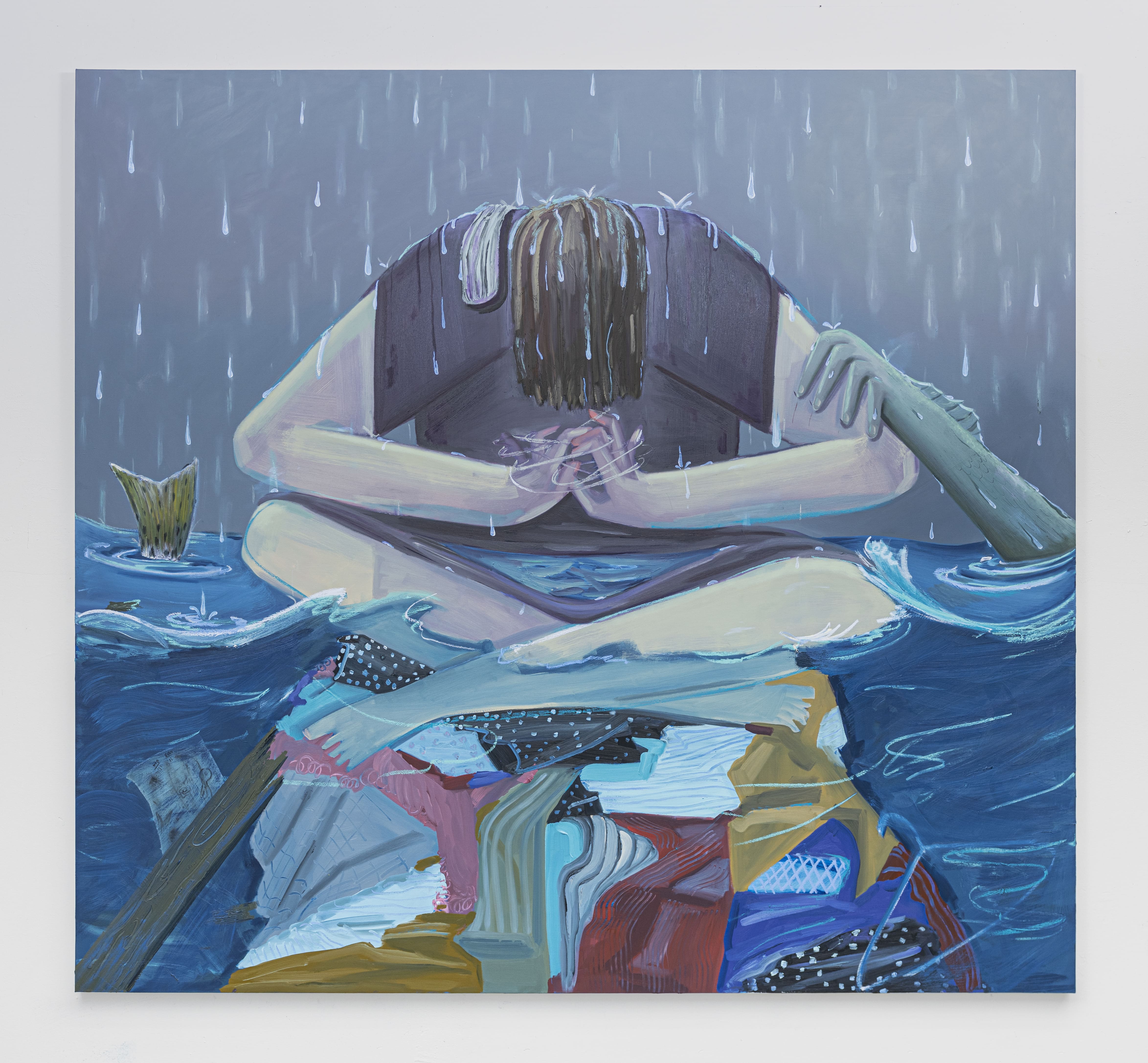 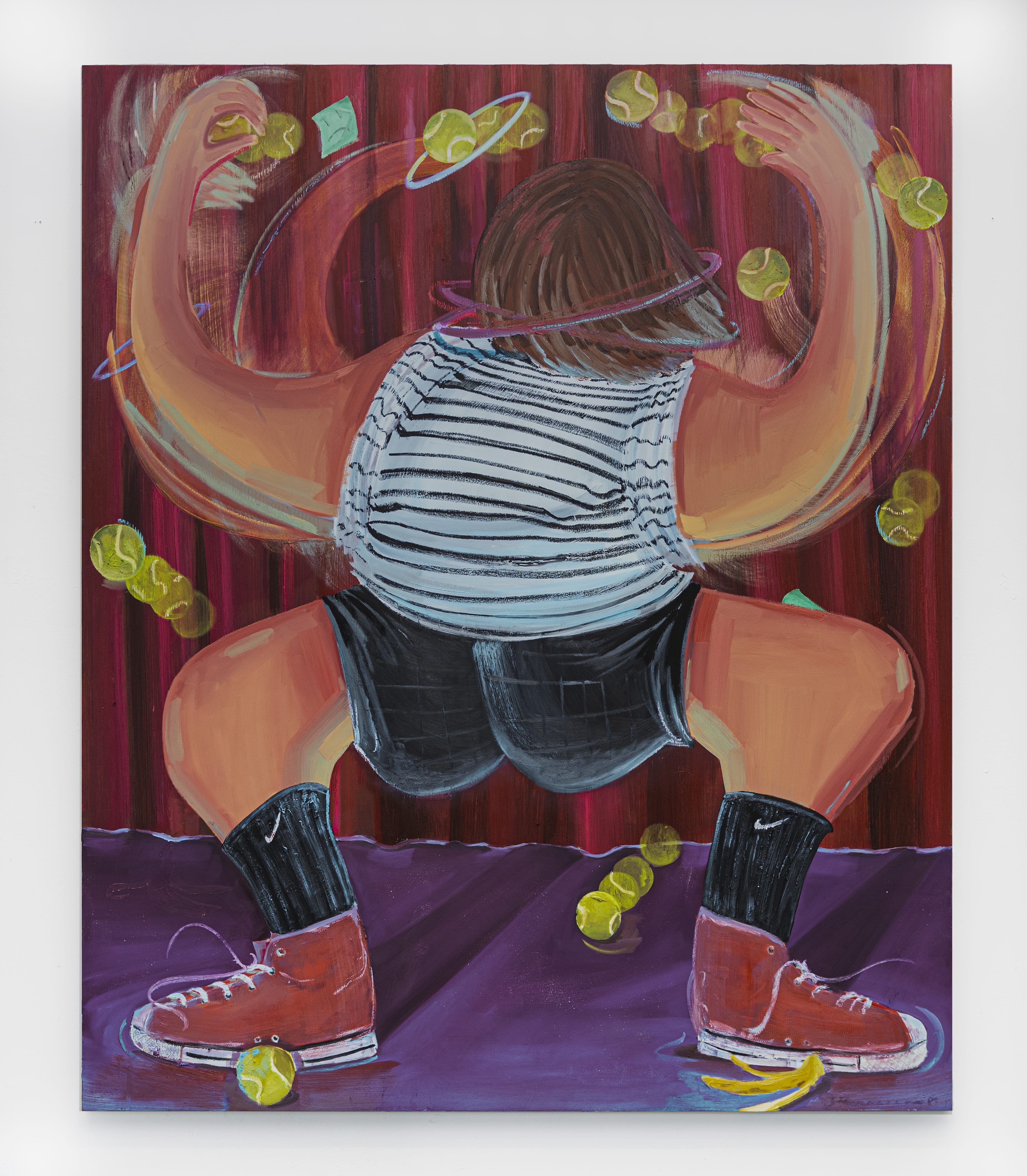 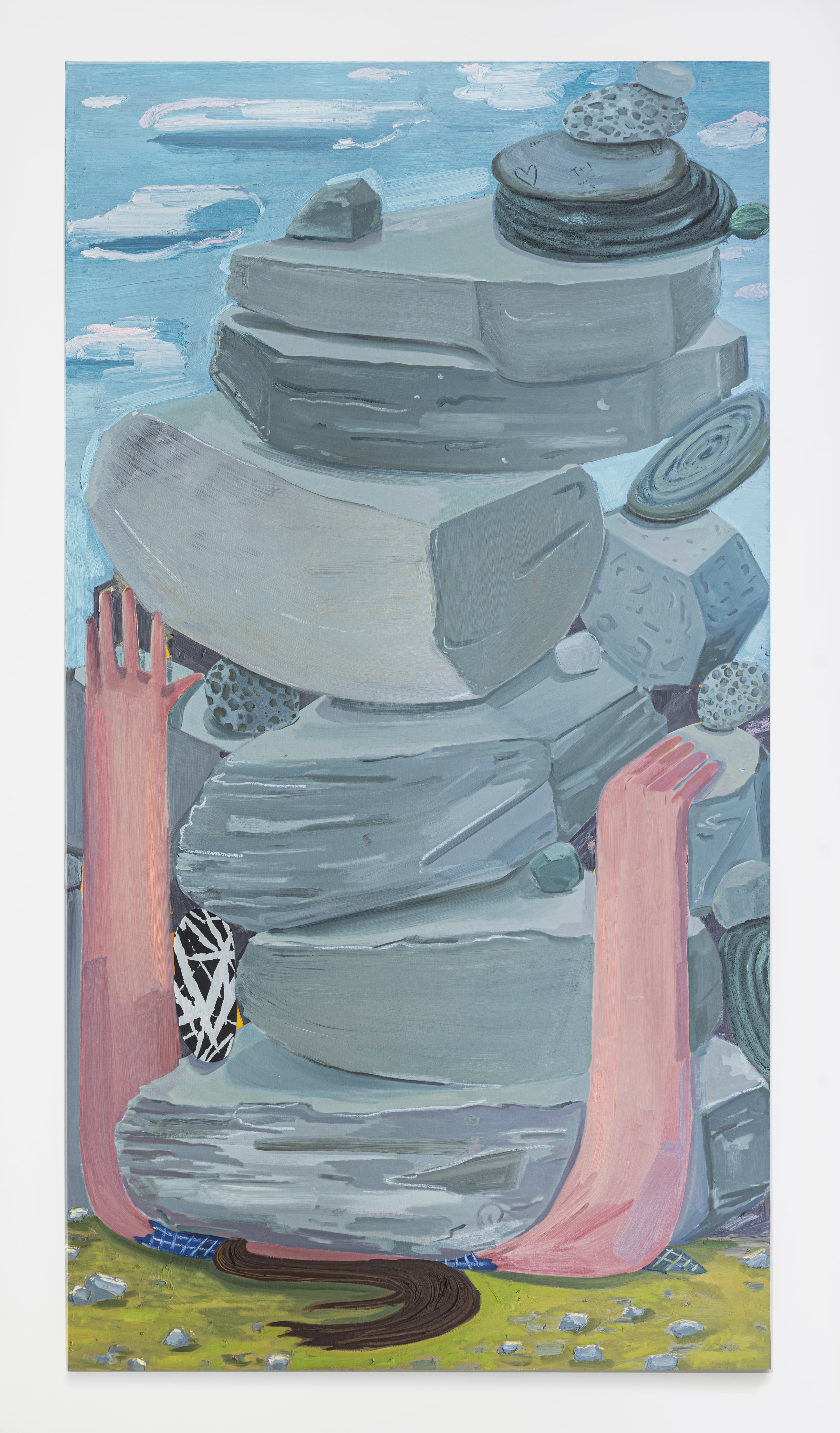 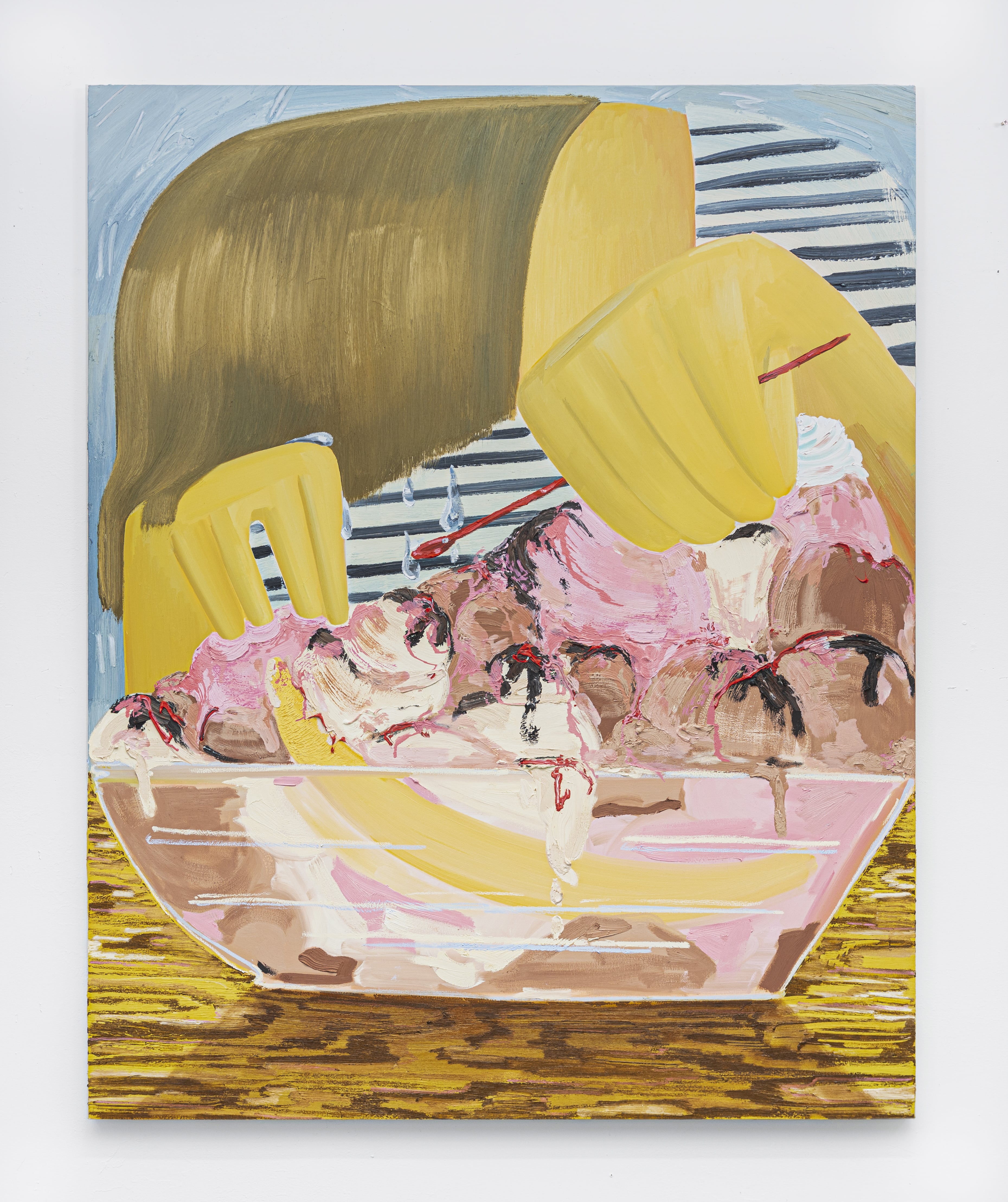 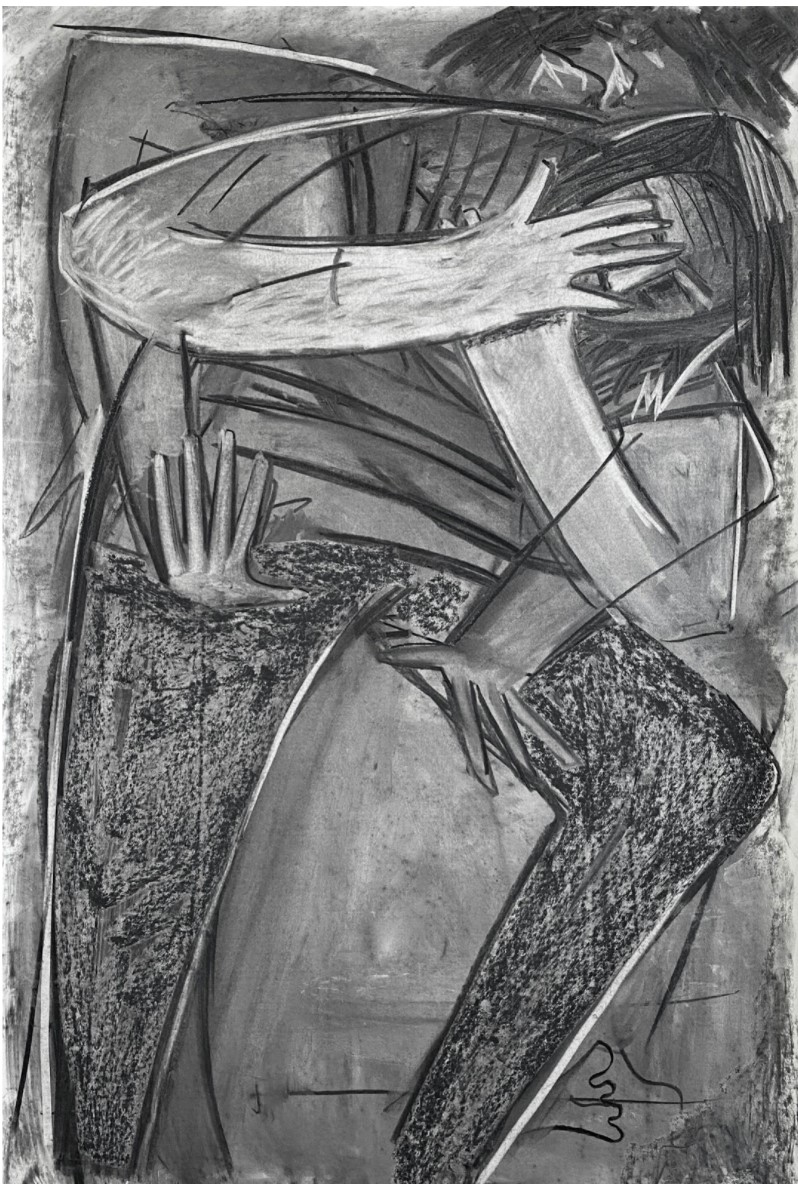 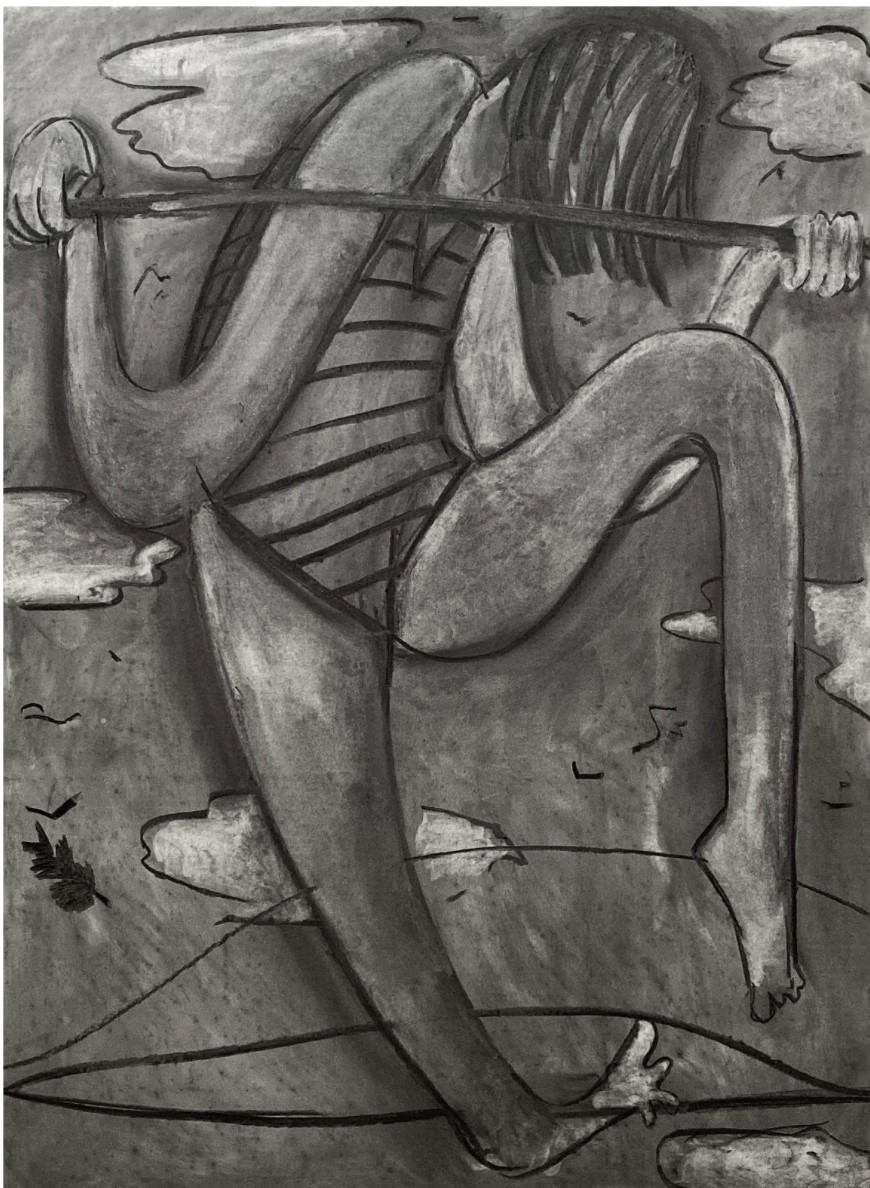 INFO
Jessica Westhafer (b. 1990) currently lives and works in Brooklyn, New York. She received her in MFA Painting from Indiana University in 2020. Westhafer’s work has been featured in several exhibitions at key galleries including König Gallery (Berlin), Thierry Goldberg Gallery (New York), Unit London (UK), and The Hole (New York).

Text by Emily May

Duve Gallery Berlin is pleased to present Mind Over Matter, a series of oil paintings and the European debut of American artist Jessica Westhafer.

Graduating from her MFA at Indiana University in the midst of the global pandemic, Westhafer recently moved to Brooklyn, New York, where the city has been putting her through her paces. In her first week alone, her car was impounded and her apartment flooded. Westhafer channeled these experiences into Mind Over Matter, transforming them into surreal scenes—characters are forced to walk perilous tight ropes while attacked by violent crows, sink in rowing boats, and cry over large bowls of ice cream as they try to eat them with comically small spoons—that act as metaphors for her emotions during an intense period of transition.

Westhafer’s paintings, however, are not despairing or helpless. They instead celebrate the power of the human spirit. One painting of a figure mindfully focusing on completing a cat’s cradle while surrounded by sodden clothes, rising water levels, as well as fish and some unnerving looking sea creatures, perfectly encapsulates the show’s title, demonstrating how sheer mental willpower and determination can often overcome seemingly insurmountable obstacles.


The works' bold colours and wonky proportions—inspired by the 90’s cartoons and Disney animations Westhafer watched during a childhood spent in front of the television—also imbue them with a degree of satirical humour. The absurdity of some of the situations Westhafer creates pokes fun at the melodramatic act of turning mountains into molehills. Referencing one of her paintings in which a character is being crushed by boulders, Westhafer says “for me, this represented moving to a new city and the pressure I was putting on myself to find a job and to be able to stay and survive in New York. It felt like all these rocks coming down on me, but really, they were small potatoes. The girl in the painting is stressing herself out, but she’s going to be fine.”

Westhafer is no stranger to using personal experiences to inspire her work: the artist’s graduation show About A Girl drew from memories of her rebellious adolescence, causing mayhem with friends who opened her eyes to life beyond the strict religious community she was born into. But despite being somewhat autobiographical, Mind Over Matter also aims to represent universal narratives. Most of the figures are depicted with their faces turned away or hidden, a new approach Westhafer has adopted in order to place greater emphasis on archetypes and emotions rather than individual characters. The theme of fighting for survival is also particularly relatable in the context of the global pandemic, as people across the world have felt overwhelmed by having to adapt to an alternate reality.
Press Text