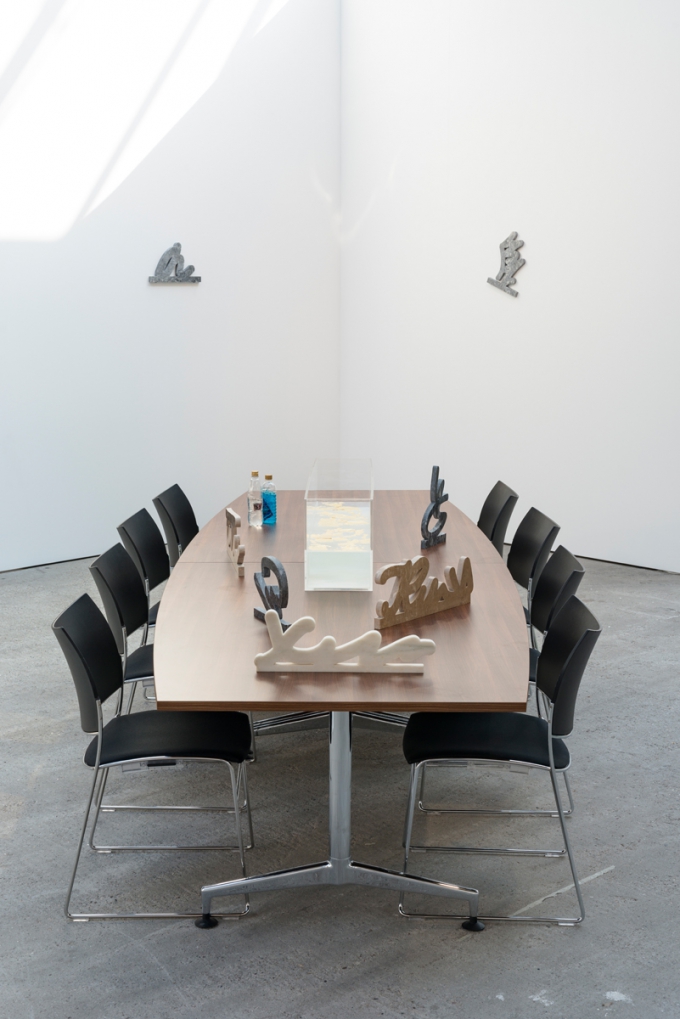 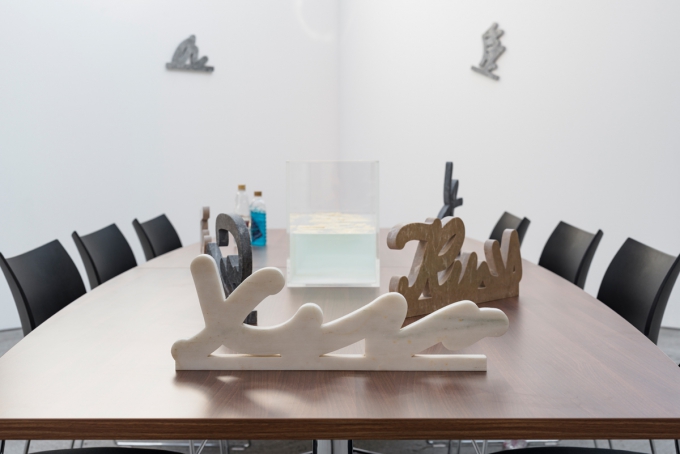 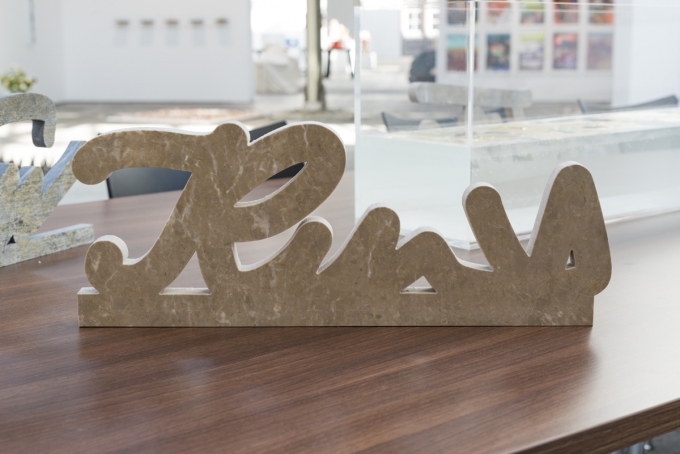 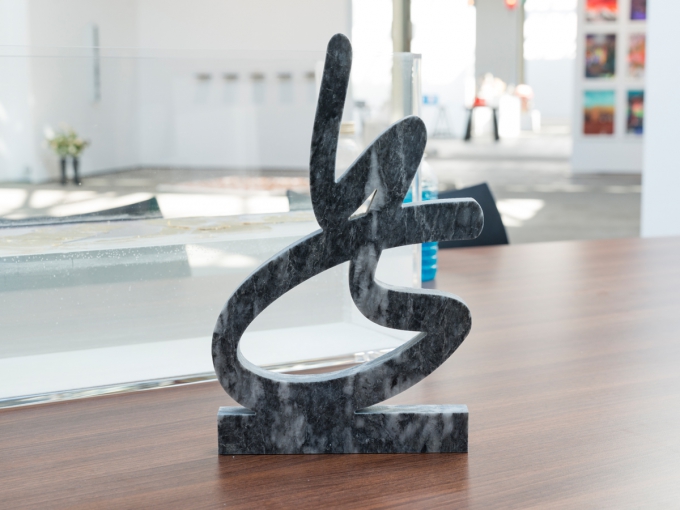 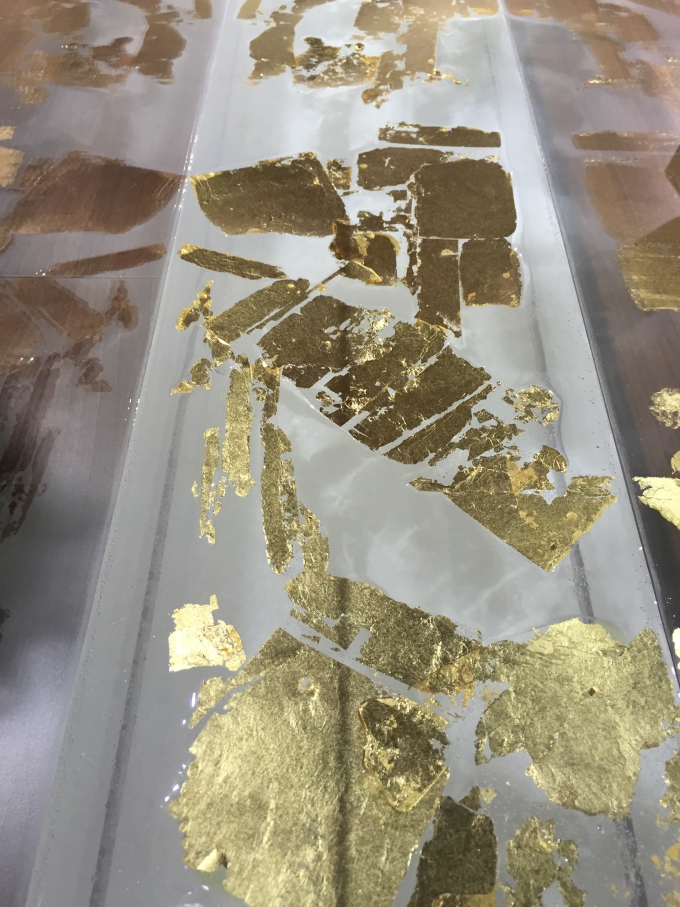 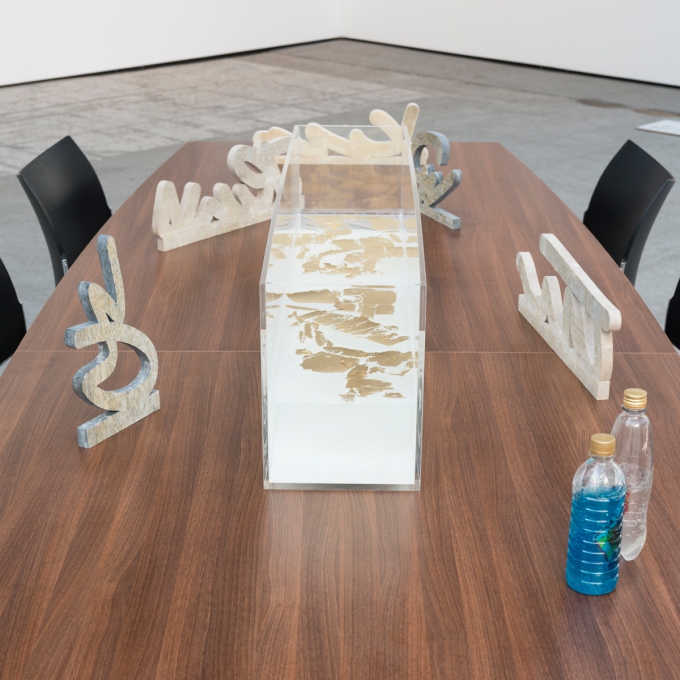 Iris Touliatou’s installation at this year’s edition of art berlin contemporary continues a series of works exploring the relations between artefacts and humans, raising concerns for the object and its environment,

its manufacture and value. The artist will expose free-standing sculptures that will explore a kind of new animism within the artist’s notion of objects and their performativity. For her new work, Touliatou delves into the curious life of the infamous Getty Kouros and its up to these days contested authenticity. In 2012 the Kouros was described on the Getty Museum’s website as ‘Greek, about 530 BC, or modern forgery’. The installation at abc consists of magnetised marble fragments, in abstract forms, that will suspend and expose various transformations on the surface of the material as well as its historical context. The sculptures are displayed on a large wooden conference table that can seat eight to ten people. In the middle of the table, a rectangular glass pool is filled with mysterious liquid, both opaque and transparent. 22 carats gold floats on top of it. Additionally, the installation diffuses a distinctive smell - coming from mock-ups of the 1980 ’s iconic Yves Saint Laurent mens perfume Kouros that the artist bought in various shops in Athens.
Exploring forms of materiality, as a way to address identity as commodity and as a reproducible synthetic construction, moving between originals and copies, these works explores the provenance of objects, their afterlife and metamorphosis.
They are proposals for understanding interactions within natural and technological environments that open up the perspectives of displaying and montaging history and space, authorship, copyright and mythology, historiography and biography into an infinite mise- en-abyme.

Iris Touliatou was born in 1981 in Athens, Greece. She studied at the Athens University of Social and Political Sciences and obtained her bachelors degree from the School of Fine Arts in Athens in 2006. Touliatou received her Masters of Fine Arts from the Ecole Nationale Supérieure des Beaux Arts de Paris, France in 2008. Recent exhibitions include Plato’s Third Eye, Meetfactory, Prague, CZ, 2014 (group show); I thought you were the real thing, ROMANTSO Cultural Center, Athens, GR, 2015 (group show); Solus Rex, National Theatre Athens, GR, 2013; and Matter Enclosed in Heavy Brackets, Museum of Contemporary Art, Leipzig, DE, 2012. Touliatou will participate in the 2015 edition of Parallel Vienna, Vienna, AT; as well as in PUBLICA 16, the 2016 edition of the Public Art Festival in New Delhi, IN. She is among the recipients of the 2014 UNESCO-Aschberg bursary, the 2014 German-Czech Future Fund, the 2011 Future of Europe Art Prize and the 2010 Onassis Foundation Grant. Iris Touliatou lives and works in Paris, Berlin and Athens.